Autonomous driving trucks on the roads - a reality today

A scary thing, that may have happened to you as well:
A truck passing by in the opposite lane and the driver is messing with his phone...and driving.
At least one more thing that we won't have to worry about as advanced technics become widespread.
Probably even sooner than you might think.

May, 2015 Freightliner Inspiration Truck is licensed to drive on open public highways in autonomous mode in Nevada, US.
Mercedes also tested in real traffic conditions on German "Autobahn" and expects a homologation as soon 2018.

THE INNOVATION PROCESS THAT HAS LED TO AUTONOMOUS DRIVING TRUCKS

It has been a long journey with no definite starting point and obviously no ending.
As more and more advanced technologies were introduced, they played a major role in achieving improved road safety and paved the road to self driving trucks.

EC legislation requires the following vehicle categories to be fitted with a Level 1 emergency braking system from November 2015: Newly registered trucks with two or three axles, a gross vehicle weight over 8,000 kg and an air-sprung rear axle. Also mandatory is a lane guard system for two- and three-axle trucks over 3,500 kg. Even stricter legal requirements for Level 2 will come into force in November 2018 for newly registered vehicles.


...but few know that the real reason of making this fantastic stunt was not pure entertaining (unlike many of the inspired internet memes).
The performance was brought to live to demonstrate the amazing precision and directional stability of Volvo Dynamic Steering.
For those interested a bit of a background in this behind the scenes video. Actually very funny.


THE BASIC WORKING PRINCIPLE OF SELF DRIVING TRUCKS


Full range radar, short range radar, front stereo cameras, ultrasound and wireless communication, 2D and 3D digital maps combined in one system make sure that just about anything and everything ahead and around the truck are monitored and analysed continuously. 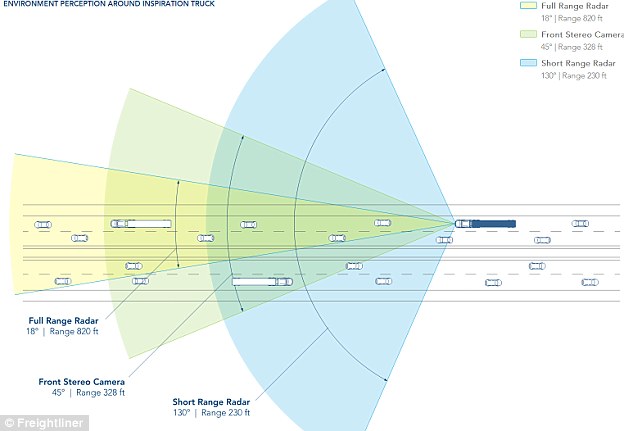 It requires a trained driver onboard, who can relax, watch a movie or take care about paperwork, but not sleeping and always prepared to take back control.

If driver fails to take over control, the truck safely stops itself (unlike auto-pilot on planes).

The system will not attempt to overtake slower vehicles or take exits.

It will adjust speed according to traffic situation, keep the vehicle safely in lane and avoid collision with other vehicles, passengers, bikes and other obstacles even by intervening if necessary.

The system can at any time be deactivated and it is always the driver gaining the ultimate control over the vehicle by grabbing the steering wheel or activating the brake pedal.

Obviously no speeding or dangerous manoeuvres at all.

Wireless technology will allow separate vehicles to communicate with each other, however it is only an option. Each vehicle must be able to function by its own.

THE POSITIVE EFFECTS ON OUR LIVES

Every year in Europe about 35.000 are killed in road accidents, in 10% of these trucks are involved.

These systems will result in:
Saved lives
Reduced human errors, driver fatigue
Fuel savings and improved emissions by up to 18%
Lower maintenance costs

Progress is unstoppable and nobody knows yet what is about to come.
But soon we'll have to change our image of a traditional truck driver for sure.

Added to your cart: